Video (German and Albanian) by Deutsche Welle to commemorate the 25th anniversary of the storming of embassies in Tirana, July 1990. 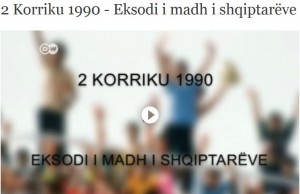 A skillful interview by journalist Andi Bejtja with President George W. Bush prior to his June 2007 visit to Albania (see Chapter 20).

Enver Hoxha celebrates the May 1 celebrations in the late 70s or early 80s.