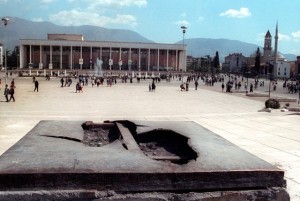 For four decades after World War Two, tiny Albania was hermetically sealed. The Stalinist dictator, Enver Hoxha, banned religion, private property and “decadent” music such as The Beatles. Political police arrested critics and border guards shot people who tried to flee. But as communism crumbled across the Eastern Bloc, the regime loosened its grip. Pressed by demonstrations and a bankrupt economy, the communists allowed other parties to exist. In early 1992, more than two years after the fall of the Berlin Wall, a democratically elected government came to power and started to bring Albania in from the cold.

Albania made a rapid switch. It transformed from a country with sealed borders to a smuggler’s dream; from the world’s only officially athiest state to a playground for religions; from a land with no private cars to a jumble of belching cars, buses and trucks. Albania flipped from a country of harsh, top-done repression to a vibrant state where most anything goes.

This book describes that dramatic jump. It tells the inside story of Albania’s awakening, the so-called revolution, when rigid Stalinism collapsed and wild pluralism stormed in. And it explains the struggle to build a more just and tolerant state after decades of repressive rule.

Vivid characters drive the tale: a paranoid dictator, an ambitious doctor, a scheming economist, an urban artist. Over twelve years I interviewed most of the influential Albanians, from ex-Politburo members to student leaders, and many of the foreigners who played a role. I combed through hundreds of previously secret records from Albania and the United States, mostly from the State Department and CIA.

I also enjoyed a front-row seat.  I first went to Albania in 1993, and worked there for one year at a media training center, watching the wobbly first steps of democracy. I then covered the country for Human Rights Watch and saw the resilience of one-party rule, a return to dictatorship and, in 1997, the crash of massive pyramid-loan schemes, when defrauded people robbed banks, torched city halls and looted military bases. I witnessed war erupt in neighboring Kosovo, culminating in NATO’s 1999 air assault. Albania offered a staging ground and supply route for the rag-tag Albanian insurgency, and later a grave site for its victims. After 2001, I observed mostly Muslim Albania serve as devoted ally of the United States. It detained and helped render terrorist suspects, accepted released Guantanamo prisoners and sent troops to Afghanistan and Iraq. Albania is probably the only country outside the United States with a statue of George W. Bush.

I also watched the United States and other western democracies repeatedly make short-sighted decisions that complicated Albania’s transition. For many years, the U.S. and Europe supported or tolerated an authoritarian or corrupt leader for the sake of stability in the Balkans and, later, Albania’s cooperation in the “war on terror.” These governments frequently backed an individual leader more than democratic institutions; and for this, Albania is today paying a significant price.

During this time, I had the opportunity to mingle with Albania’s elite. I watched former political prisoners join the government and government ministers go to jail.  I saw foreigners who loved Albania get declared persona-non-grata while swindlers won business contracts and the highest state praise. I have been called a Communist, a CIA agent, pro-Albanian, anti-Albanian, pro-Greek, anti-Greek, pro-Serb, anti-Serb, and by one journalist, “a whimsical boy with an earring and short pants.” Through it all, I have been privileged to peer behind the curtain of a society that is for many outsiders opaque.

The book has limitations. First, it focuses on the capital, Tirana, and the boulevard that forms its spine. Second, it deals primarily with men, who still dominate Albania’s public life. Third, it mostly explores Albania’s relationship with the United States, with less attention on other states. With these in mind, I hope it helps dispel myths, spark debate and shed light on a tiny country going through a remarkable time.