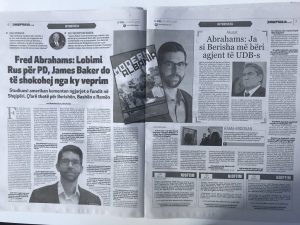 What was your first reaction after reading the Mother Jones investigation about the way of lobbying of DPA in Washington?

Neither surprise nor shock. The story offered new details but we know the shady work of political parties and lobbyists in the United States, offering and accepting money for narrow ends. It highlights the lack of adequate transparency in the political system of both countries.

Hopefully the frenzy of DP bashing doesn’t shield Edi Rama and the SP from legitimate criticism. No matter how mischievous one side plays, the other side deserves no free pass.  And if we’re going to look critically at foreign relations, then we should examine the role of other states, such as Erdogan’s Turkey.

From your point of view do we have marks of Russia paying Muzin Capitol Partners lobbying company in favour of DPA?

I see troublesome indications that demand follow up and investigation – for sure by journalists and perhaps by judicial authorities. The article raises questions about conduct in both Albania and the US, and about the lack of effective reporting mechanisms to cover political funds.

This investigation has created a huge political storm in Albania. How damaging is all this for DPA?

Paying lobbyists abroad is a long-standing practice by all parties in Albania and the region but the Russia angle is indeed new, and that coming in a country with deep post-Cold War ties to the US. James Baker would be shocked by the party that he, President Bush and many others so enthusiastically supported.

But the bigger damage is to Albania because it casts the blue-red split in binary terms: West versus East, democratic versus autocratic. The reality is more complex.

Do you think Mr. Basha and DPA have been so naïve to get involved in all this receiving support from Russia?

Like all parties, the DP is trying to align itself strategically with political trends. Rama had come out against Trump so Basha leaned the other way.

For me, the scandal highlights a critical question that Albanians should ask of all their political leaders: who funds your political campaigns, your activities, your holidays?

Do you think USA Department of Justice and FBI based on what Mother Jones has published will investigate this matter?

I don’t know but serious questions remain, including why Muzin failed to report his activity accurately at first. I’d add, however, that he’s not the first to improperly report his work on behalf of a foreign interest. In 2006, for example, Berisha hired former U.S. Secretary of Homeland Security Tom Ridge as a consultant for $480,000 per year to help get full membership in NATO.  Ridge failed to register his contract for 21 months, in violation of the law, and did so only after an investigation.

If USA Department of Justice and FBI will investigate further this matter how damaging it will be for Mr. Basha and DPA?

It depends what the investigation finds.

Why is Russia so keen to penetrate in Albania a NATO member after clear attempts to be influential in Montenegro and Macedonia?

Russia’s activity in Albania and the region reflects its renewed sense of power around the world. It’s an effort to exert influence in a strategic part of Europe, and to undermine western expansion. At the same time, Russia’s advance fills a void left by the West. The waning interest, weak foreign investment, internal divisions, and slow EU accession process opened the door for vodka to replace wine.

The same is true for Turkey, firmly controlled by Erdogan and his family. Whether its financing mosques, building airports or hosting the prime minister at weddings, his influence in Albania and Kosovo is strong and deserves attention.

Do you have any information about other tools Russia is using to be as much as possible present in Albania even to interfere in political life?

It’s no secret that Russia has intensified its activities in the West Balkans in recent years, taking advantage of the West’s retreat and people’s disillusionment with democracy. This includes a propaganda and disinformation campaign, especially targeting Serbs, that promotes conspiracy theories and stokes inter-ethnic tension. The efforts in Albania appear to be more limited, given the country’s demographics and history, but there’s a steady Sazanization nonetheless.

How do you see this race between Basha and Rama to have photos with USA presidents? First, it was Rama having a photo with Obama and now Basha with Trump. Why all this?

It’s like a photo machine on the street: insert coins and a picture comes out. Again, the public has a right to know who holds the wallet.

You are the author of a very interesting book Modern Albania.  Do you follow and how do you see the latest developments in Albania?

I’m concerned on two levels: local and regional. On the former, I’m seized by the pernicious connection between business and politics, which erode the fundamental institutions that are so essential for a democratic state. I’m thinking first and foremost about the judiciary, but the media also comes to mind. An important report by BIRN and Reporters Without Borders this week showed how a large percentage of the media is owned by a few families. The public is not getting the information it needs to make informed decisions and to hold politicians to account.

The Socialists get tolerated because of the DP’s bad behavior. But Rama has not done enough to sever the business – criminal – party – government ties, and he’s found ways to use them for his advantage.

On the latter, the Balkans have become a dangerous place. The frustrating flirtation with Europe and the rise of Russia, Turkey and some Islamic states have added kindling to the fireplace. The unresolved issues in Bosnia, Kosovo and Macedonia are ripe for exploitation. Europe is less unified to address them coherently and the Trump administration seems content to impose tariffs and build walls.

What do you think of the new leader of DP Lulzim Basha?

I’ve raised concerns since his indictment around the Bechtel-Enka deal to build the highway, which was later dismissed. Now it appears as if the DP is turning against him. I always wondered who could keep the DP together when the doctor left.

Sali Berisha resigned as chairman of DP. How do you see his role now in Albanian politics?

A cardiologist keeps his hand on the heart. But I think Albanians and internationals know that Berisha uses his influence to protect the interests of his family. He can mobilize hardcore supporters when it suits his needs.

How do you see the way Edi Rama is governing the country for the second term as Prime Minister?

His strong electoral win offered an opportunity and a risk. On the one hand, he earned a chance to move policies forward without obstruction. On the other hand, this power feeds into a negative aspect of Albanian political culture: the tendency towards autocracy and control. Coupled with weak institutions, this presents a grave danger, and Rama has not sufficiently resisted the trend.

On foreign policy, I’m disturbed by his shameless relationship with Erdogan. Although Rama pushed against communism as an art professor and was beaten by anti-democratic thugs in 1997, he has cozied up to a Turkish autocrat who shows no respect for human rights. Rama cannot speak about free speech if he remains silent on the widescale imprisonment of Turkish journalists and academics. He cannot condemn torture without commenting on systemic abuse in Turkish prisons. And he cannot talk about regional peace and security without condemning Turkey’s violations against Kurds. If he attends another wedding, he should ask about Taner Kılıç, the head of Amnesty International Turkey, who has spent the last 8 months behind bars.

According to you what is the most worrying aspect in Albania now?

When I think about the student demonstrations of 1990, the worker strikes, and the toppling of monuments, I question whether today’s Albania was what many of those brave people had in mind.

Do you think Albanian people, politicians and all society are doing enough to get close to EU?

I find that the wrong way to express the goal. The important aim is not to join the EU but to build the political, economic and cultural pillars that support a strong house. That house may belong in a Brussels neighborhood if that’s mutually beneficial or it may stand elsewhere. But it must have a solid foundation based on fair laws, thick walls to enforce those laws, and a sealed roof to repel the malign influences that can come from home and abroad.