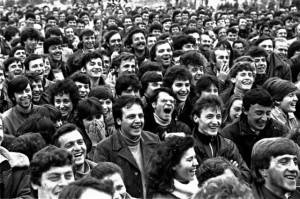 Modern Albania is drawn primarily from interviews with more than 200 individuals who participated in Albania’s recent political events, Albanians and others, as well as personal observations. Unless cited in an endnote, quotations come from these interviews, conducted between 2000 and 2014.

The vast majority of people spoke on the record. Four people refused to speak. The most important of these was Sali Berisha, who ignored three requests and once directly declined. The second was Albania’s last communist-era Minister of the Interior Hekuran Isai. The third was Enver Hoxha’s widow Nexhmija. The fourth was Marisa Lino, U.S. ambassador to Albania from 1996-1999.

The book also uses communist-era Albanian government documents and previously classified U.S. government records from the State Department and Central Intelligence Agency obtained with the Freedom of Information Act, as well as U.S. diplomatic cables released by Wikileaks. Articles from the Albanian and international media are also used, as are reports from relevant organizations.